Eu-Aktion was a euthanasia program geared towards creating genetically pure Germanic people. Patients with psychiatric, neurological or physical disabilities, the ‘incurable’, were systematically eliminated. This euthanasia was seen as a ‘therapeutic act’ called ‘Gnadentod’ (a mercy death). Within the ‘Eu-Aktion‘ (the so-called Aktion T4 whose name was derived after WWII from its headquarters address in Berlin at Tiergartenstraße 4), six institutions in the German Reich were equipped for the execution of ‘euthanasia’. The building of a former prison in Brandenburg was used for this purpose, while in Grafeneck, Hartheim, Pirna-Sonnenstein, Bernburg, and Hadamar, ‘euthanasia’ was carried out in former lunatic asylums. All ‘T4’ annihilation centers were fitted with a gas chamber where patients were killed with carbon monoxide. The medical organization of this operation fell to some prominent psychiatrists. Nurses and office clerks were recruited locally. Some perpetrators were employed thanks to their personal connections with the main organizers. Eu-Aktion operated between 15th January 1940 and 24th August 1941 and over 70,000 people were killed within this operation. A large part of the participating personnel (starting in the autumn of 1942) was employed in ‘Action Reinhard’ (Aktion Reinhard), which by the autumn of 1943 led to the murder of 1.75 million Jews.

Antonie Maurer, born in 1873, was kept as a patient in Landessiechenanstalt Kindberg until 25th February 1941, the day of the transport of 68 people to annihilation center Landesanstalt Hartheim. Most probably the transport between Kindberg to Hartheim went via Gau-Heil- und Pflegeanstalt Niedernhart (transit institution), a neurological hospital in Linz. Both Hartheim and Niedernhart fell under Dr. Rudolf Lonauer’s administration.  The patients, who were appointed to be killed in Hartheim, were not officially accommodated at Niedernhart. Dr. Lonauer had special battalions to ‘park’ patients as the killing facility at Hartheim had limited capacities at its crematorium.  At postwar trails the perpetrators spoke of a 3-5 day stop in Niedernhart.  Exactly which battalions were stationed at Niedernhart is unknown as any documentation was destroyed by Dr. Lonauer before he committed suicide. 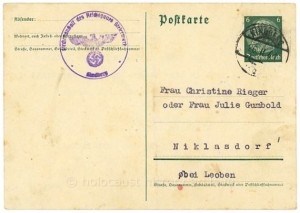 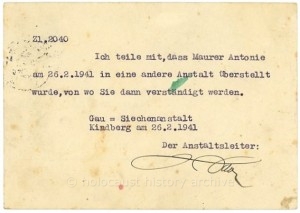 The patients were transported to the annihilation center by train and buses. They were subsequently handed over to the personnel of the annihilation center and taken to a special (reception) room where they were undressed and ‘examined’. During this procedure, appointed physicians already determined their ‘cause of death’. After being examined, they were taken, under false pretenses of taking a shower, to the gas chamber. Their bodily remains were pulled out by the gas chamber workers who subsequently pulled out any gold tooth fillings from the mouths of the victims before cremation.

In 1945 a cover-up had been arranged to fool the allies; In December 1944 twenty prisoners were brought over from concentration camp Mauthausen to redesign the annihilation center Hartheim into an orphanage. By that time all the administration had been taken away or destroyed by the perpetrators. 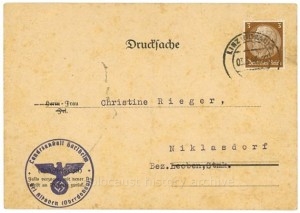 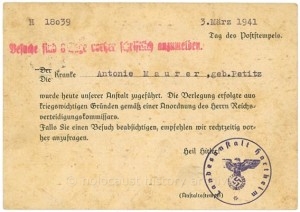 Information postcard concerning the day of arrival of Antonie Maurer at Landesanstalt Hartheim sent on 3rd March 1941. Most probably Antonie Maurer is already killed on this date. As far as we know such postcards sent from Hartheim have never been seen or spoken of. This information was usually sent in sealed envelopes.